UV-C radiation has drawn much attention in recent years as a candidate for controlling harmful algal blooms. Most microalgal species have been proved to be effectively suppressed by UV-C radiation and the suppression effect has a positive correlation with UV dose.

In this article we will discuss the initial proof of concept testing carried out by Typhon to investigate the effect of using UV-C LED light sources to suppress algae growth.

Algae are simple non-flowering photosynthetic eukaryotic organisms that are typically aquatic, and include macroalgae (such as seaweed) and microalgae (single celled forms). They contain chlorophyll but unlike plants, do not have true stems, roots, leaves and vascular tissue. They grow in both fresh water and marine environments.

Algae have photosynthetic machinery (chloroplasts) that use light and carbon dioxide to produce new cell biomass with oxygen as a by-product of photosynthesis.

However, under certain conditions, high densities of the microalgae occur (algal bloom) which discolour the water and outcompete, poison, or asphyxiate other life forms.

Exposure to blue-green algae and their toxins (cyanotoxins) through contact with skin, swallowing or inhaling affected water can cause a wide range of symptoms in humans and animals. These are sometimes serious and include rashes, skin and eye irritation, blisters, stomach cramps, vomiting, nausea, diarrhoea and liver damage. 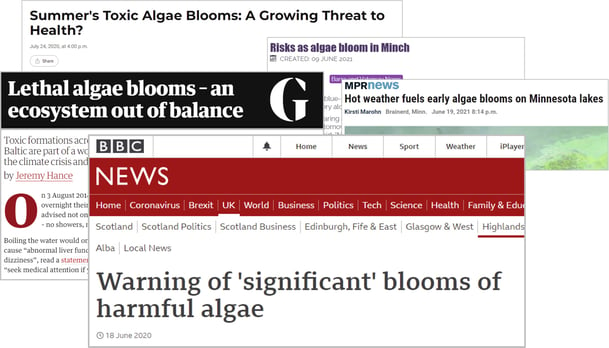 Algal blooms occur naturally in lakes, ponds, canals, rivers and reservoirs around the world and are a result of nutrient (mainly nitrogen from decomposed fish waste, uneaten fish food, dead plant material and accumulated sludge, and phosphorus from fertiliser run-off) entering the aquatic system, which leads to a depletion in oxygen levels and some organisms secrete toxins into the water.

They are particularly a health risk during warm summer months when high concentrations can be seen as scum on the water surface. This can look like green or turquoise wispy paint, or clumps of green particles. Often these surface scums accumulate along the shore where children or dogs play, or where livestock come to drink.

THE EFFECT OF UV LIGHT

The influencing factors of UV-C irradiation on algal cells are:

As explained above, this trial was an initial proof of concept to establish a baseline performance so that we can move forward with the development of our understanding around the effect of UV-C radiation on different forms of algae and, linked to that, the optimum UV Dose and recirculation rate required for an effective algae removal process and also the most effective UV LED Reactor design for such applications.

Two 40 litre tanks were set up in the workshop filled with rainwater, river and lake water (from the local Bassenthwaite Lake, Derwent Water and Loweswater Lake) containing algae.

MiracleGro was used as a nutrient source (algae requires nitrogen, phosphorous and potassium to grow) and a simple aquarium pump used to provide aeration.

The tanks were then left for a couple of weeks on a window ledge with plenty of exposure to sunlight and as high a temperature as Penrith in summer will allow.

Both tanks turned a nice deep shade of green but to provide a more accurate measurement we monitored the rate of growth by measuring the chlorophyll-a absorbance using a UV-spectrophotometer measuring the absorbance change over time at a constant 679nm.

After the 2 weeks growth we plumbed in a prototype BIO-100 UV LED reactor to one of the tanks allowing the water to flow through and continuously recirculate at approximately 4 litres/min while continuing to let algae grow untreated in the control tank. 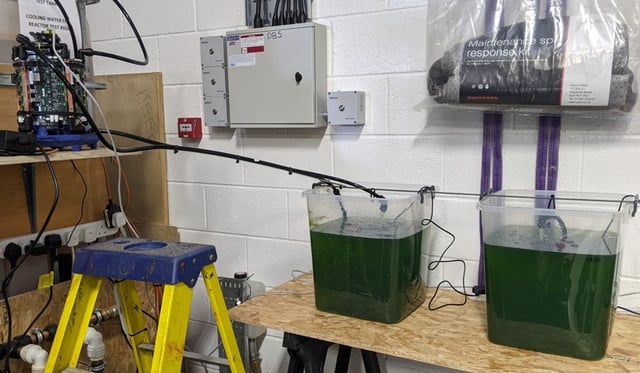 Over the next 4 days, with 24/7 UV treatment, the test tank gradually turned visibly less green until the water was almost clear when viewed in a beaker. 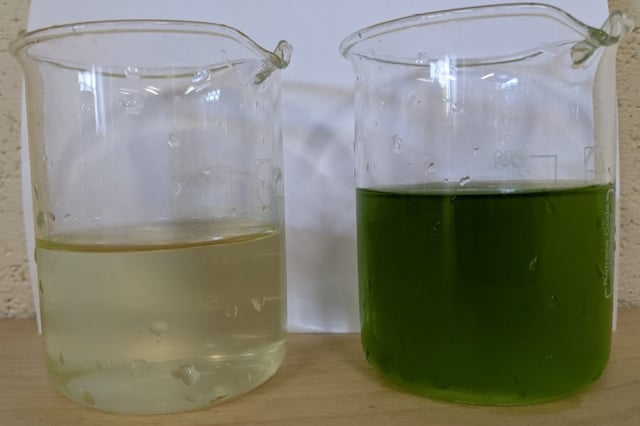 And the chlorophyll-a peak (absorbance at 679nm) disappeared from the scan on the spectrophotometer: 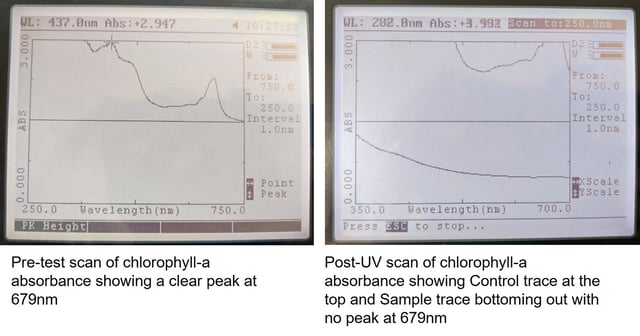 As an additional test we wanted to determine the effect of removing the UV treatment. So the tanks were left again on the window ledge.
Over the next 4 days the control sample continued to show algal growth but the treated sample remained clear, even when more nutrient was added.

The following graph shows the effect of the UV-C LED treatment on chlorophyll-a over the whole test period compared to the control sample.

This simple test process demonstrates that UV LED at 275nm can be effective in removing algae from a water source.

We also measured the UV Transmissivity (UVT) at the standard 254nm prior to treating with UV-C radiation. The UVT after 2 weeks algae growth measured almost 0%.

Interestingly, even though the post-UV treated sample showed a very low absorbance at 679nm and was visibly much clearer than the control sample, the UVT measurement was still close to 0%.

For this initial testing, the UV Intensity from the BIO-100 Reactor was not measured as we are not looking to define an optimum dose rate at this stage, rather an understanding of the gradual degradation of algae through a recirculating system.

The potential advantage of UV LED compared to traditional mercury UV lamps for such as process is that LEDs generate no heat at the quartz/water interface so don’t have the same issues with scaling and baking on of particles which require mercury lamp systems to require wiping systems which have the knock-on effect of increased maintenance.

The potential uses for UV for the removal of algae are widespread and include fish farms, aquariums, zoos and a wide variety of industrial applications. Indeed, mercury lamp systems are already used for low flow applications such as ponds and fish tanks.

But, this is the first step to demonstrating the effective use of UV LED solid state technology which may provide efficient algae removal for larger scale applications and at the same time protect the environment from the harmful effects of mercury