This article is written as a follow-up to my presentation at the IUVA Americas conference in Cincinnati on 27th September 2022 and is intended to explore the subject of the comparative power consumption of Mercury (Hg) and LED UV Systems in more detail and hopefully prompt dialogue and debate on the subject among UV system suppliers, Consultants and potential End Users of the technology.

Typhon was founded in 2014 to develop a UV LED system suitable for municipal scale water treatment applications. The understanding at the time was that the technology was no where near ready to take on that challenge and significant advancements were required in both LED technology and Reactor design to create the environment for a UV LED System to compete with traditional low Pressure (LP) and Medium Pressure (MP) Hg lamp UV Systems

Since those early days we have seen an exponential progression of UVC-LEDs in terms of output power increases and cost decreases. But efficiency, in terms of power consumption, has always been a challenge with LED manufacturers struggling to work out how to achieve effective transmission of UV photons out of the LED device and into the water.

Wall Plug Efficiency (WPE) is typically used as a measure of UV lamp performance - comparing the electrical input power with the UVC output power to give a measure of light source efficiency.

However UV Reactor geometry also has a significant impact on overall system efficiency and Electrical Energy per Order (EEO) is also used to take account of that overall system efficiency. Typhon recognized this challenge from the very start and focused on developing a highly efficient reactor maximizing the system performance based on the available LEDs.

The question which then presents itself is, as LED efficiency continues to improve, when will a UV LED system be able to compete with a Hg UV System in terms of power consumption.

The common answer from traditional Hg UV suppliers is somewhere between 5 to 10 years.

This view of the world is often colored by how a traditional Hg UV System performance is measured without taking a step back to look at the impact of how UVC-LEDs work and the operational benefits that can be directly related to improving system performance.

Municipal Scale UV LED has now been deployed across 3 continents - with Metawater and Aquisense in Japan and USA respectively, and Typhon's first commercial installation of a UV LED system in the UK.

The work which Typhon have been able to do with United Utilities in the UK demonstrates the impact of the speed of operation of the LED system in delivering a known outcome in terms of power consumption across all variations in flow and UV Transmissivity (UVT) conditions allowing Typhon to exactly mirror Actual system power consumption with the Calculated power consumption based on the reactors validation algorithm.

In 2018 Typhon achieved the Worlds First USEPA Validation of a UV LED System. That process was repeated in 2020 with the validation of their B-310 reactor by Carollo Engineers in collaboration with TZW in Germany. That work expanded the validation envelope to accommodate up to 4-Log inactivation of any target organism across a range between 70 and 98% UVT and up to 500m3/h Flow.

The key outcome of validation testing is the development of a dose monitoring equation that relates: the UVT of the water; the flow rate; the power of the light source; and a number of constants specific to a reactor, to an achievable log inactivation of a target organism. On a live water treatment works, if you know the Flow Rate, UVT and the target UV dose, it is possible to predict your sensor reading (S/S0). Then, as S/S0 is directly related to the drive current applied to the LEDs, it is possible to accurately predict the power consumption of the Typhon system.

Also key to optimizing performance is the range and speed of adjustment that UV LED brings:

LEDs are able to switch from OFF to full output in 100 milliseconds and can adjust their output linearly by varying the drive current such that 50% Electrical Power in means 50% UVC Power out.

In addition LEDs can be cycled ON/OFF - continuously if required - without affecting LED performance or life. Typhon have incorporated this feature into our B-310 Reactor validation allowing us to switch LEDs ON/OFF dynamically during operation.

Combining Dynamic Switching with Drive Current variability allows Typhon to adjust the output of the B-310 Reactor from 100%, down to less than 10% Output and to be able to switch between those conditions in 100 milliseconds all of which prevents overdosing and ensures that the Typhon system delivers the most efficient dose available across all variations of flow and UVT.

But by how much can this variability and speed of operation compensate for a shortfall in top line power consumption?

The investigation of this installed LP Hg UV System was of particular interest to the End User due to the perception of consistent overdosing and hence inefficient delivery of the UV disinfection requirement.

The Full Power output per reactor is 0.93kW. By comparison the full power for a Typhon B-310 UV LED Reactor is 1.8kW.

Typhon have developed a simple to use Data Acquisition and Analysis Tool (DAAT) which will both collect the available Flow and UVT data being used by the installed UV System and also monitor the power consumption of the installed system using CT clamps. By collecting all three parameters simultaneously we are able to see how the Hg UV System reacts to variations in flow and UVT and then compare that with the real-time adjustment achievable by the UV LED system. 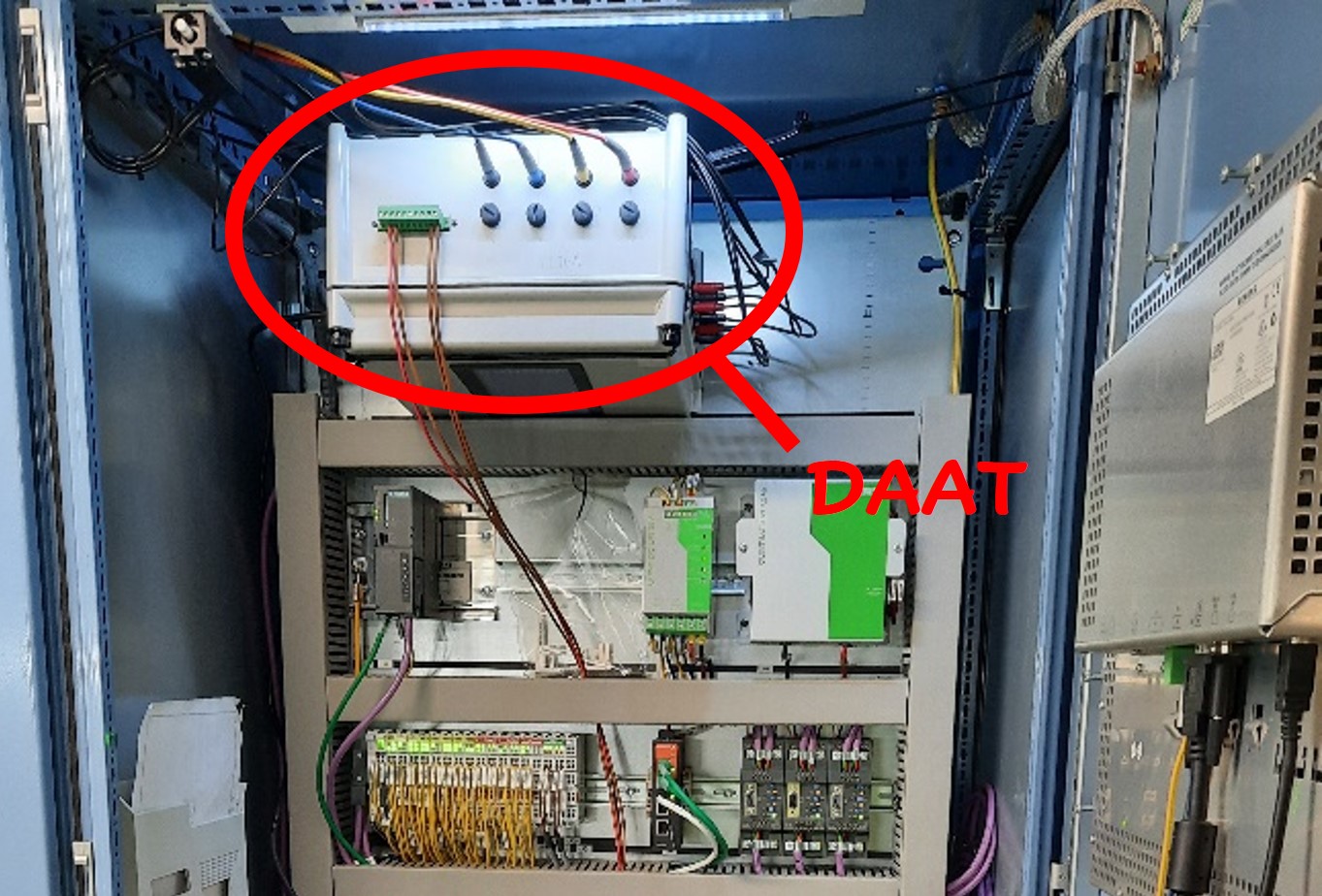 The flow and UVT profile below shows that the flow was intermittent, with at least 3 ON/OFF cycles per day. What is also noticeable is a period between 1st and 9th May where the flow was isolated for maintenance, though the UV System remained in standby mode.

To avoid any bias in the comparison between technologies this period has been excluded from the analysis.

Flow and UVT Data over the adjusted trial period

The adjusted data shows that the maximum flow rate observed during the monitoring period was typically around 80m3/h, 20% less than the design flow, and the pumped flows are very consistent over that period, though taking the ON/OFF nature of the site into account the average flow rate was only 27m3/h.

The UVT throughout the monitoring period was very high, with the minimum UVT observed being 96.5% with an average of 98.2%.

This shows a substantial differential between the worst case Max Flow/Min UVT and the average operating conditions meaning that the Hg UV System was constantly overdosing, even at its minimum power settings.

At the design extremes the UV LED system uses significantly more power to achieve the same outcome as the Hg UV System - 1.8kW compared to 0.93kW.

However, during normal operation, the Instant ON/OFF speed of response of the UV LED System, coupled with a potential turn-down capacity of the system to less than 10% of the design maximum, means that, on average, the LED system uses substantially less power than the Hg UV System - 0.36kW compared to 0.47kW.

There are other interesting contrasts between the power consumption profiles:

When the UVT increases, the water quality improves and less energy is required to achieve the UV dose and the way that the UV LED system follows both profiles indicates the much greater turn-down and speed of adjustment of the LED system.

It is also worth noting that when the flow was OFF the mercury system was still using 225W of power which has a substantial impact on the overall power consumption taking actual operating conditions into account.

Calculated power consumption of the B-310 UV LED System showing the average power used over the adjusted time period.

Looking at the cumulative power savings over the (near) 18 Day adjusted monitoring period, the difference in power consumption is significant - 195kWh compared to 148kWh - a saving of around 25%

For many in the UV water treatment industry UV LED is still seen as a future dream - not yet ready for municipal scale applications - limited by low power and low efficiency of currently available LEDs.

If we just focus on the comparative light sources themselves - LP or MP Mercury UV Lamps or UVC-LEDs - then that is a reasonable assumption to make. But UVC-LEDs are improving all the time.

However, it is important to take account of the true operating conditions to understand the true, efficiencies of the different technologies.

LED offers several advantages that have a direct impact on power consumption.

Instant ON/OFF and unlimited cycling means that disinfection is available immediately, when needed. In addition the turn-down capacity of the Typhon system ensures that the optimum dose is delivered at all times - without the need for overdosing and irrespective of the rate of change of flow or UVT.

The choice of Water Treatment Plant for this first DAAT experiment was no coincidence - this was a relatively small site which had a high frequency of ON/OFF cycles of flow as well as high UVT - making it favorable to a UV LED solution.

However the outcome was unknown and a potential power saving of around 25% by adopting a UV LED solution, when annualized, and particularly taking into account the current global energy costs, is substantial.

Obviously power is only one element of the overall picture when considering the cost of ownership of a UV System over a 15 or 20 year operating life. Decisions are made by looking at capital cost of equipment, light source replacement cost, maintenance as well as power consumption. The traditional comparison of different, but fundamentally the same, mercury UV systems is simple and requires little analysis beyond Reactor and Lamp Costs.

LED presents Consultants and End Users with the challenge to consider not only a more detailed analysis of how a system might operate today, but also to consider the continued progression of the LED technology which will increase the potential savings with each LED change-out.

As mentioned above, this Cast Study was conducted on what could be a regarded as a favorable site, suiting a UV LED solution. Typhon is now starting a programme to explore a wider range of site conditions and to carry out comparisons against a wider range of Hg UV Systems to help Water Utilities understand their existing UV assets and how adoption of UV LED could help them in the drive towards a more cost effective, environmentally friendly UV disinfection solution and to support the drive towards Nett Zero Carbon Emissions.